With their first production at Daniel Brunet’s new 3.0 vision at the English Theater in Berlin, A Fish Needs a Bicycle expands the boundaries of theater by introducing a third character of uncertainty: Twitter. The chilling real time window into the hate generated lower vibration cyberspace projected into the spare set just hints at the intervention this male-female team pulled off while trolling the undercurrent of cyber misogyny masquerading as “Meninists” seeking male rights.

Gem Andrews and Richard Gibb penetrated into this dark virtual world to create the English lower-class character of Mike, who has ambitions to win a contest for a one-way ticket to Mars offered by an authentic website, Mars One. The five chapters of his real-time video application comprising this theater piece hover between the comic and tragic as Mike’s real life interferes, revealing sexual fears and hatred of his mother, for whom he is the caretaker. Gibb’s fearless plunge into the inertia of male ego is, gratefully, balanced by the transporting appeal of Andrews’ original songs. 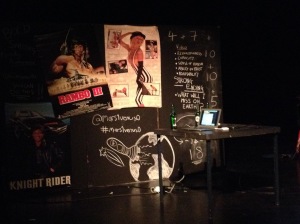 Richard Gibb and Gem Andrews led an engaging discussion after their show illuminating their archeology of the chilling Menisita Twitter feeds that became the Third entity for the Conversion of their piece.

The overall effect is more powerful than apparent on the surface, not only because Mike derides the feminine quality of number when his narrative structure, the five, is associated with Venus. This, along with the duo’s name, which overturns the seventies feminist phrase “a woman without a man is like a fish without a bicycle,” reveals the subtle artistry guiding this innovative Brit “made in Berlin” collaboration that, paradoxically, evens the score.

“I am not Mike” said Richart Gibb to a critic after he changed his shirt with an image celebrating the 3.0 energy of an authentic gender free collaboration.

A QUANTUM LEAP INTO GESTALT ONTOLOGY

Over the turn of the millennium… the World’s great philosophers began their climb to the Swiss Alps to participate in the Saas-Fee laboratory of Dr. Wolfgang Schirmacher. Hermeneutics of New Modernism Is the ontology of what happened there that changed the course of western civilization.

THE TEXT REVEALING THE QUANTUM LEAP!

A NEO-MODERNIST MOVEMENT INTO THE THIRD MADE VISIBLE THROUGH ART

THE ONTOLOGY OF THE HIEROS GAMOS

Dr. Lisa Paul Streitfeld, daughter of Harold Streitfeld, leader of the sixties Human Potential Movement, traveled around the globe investigating a new modernism in her (R)evolution series for Huffington Post Arts. However, rather than pursuing her father’s path to India, her archeological pursuit of his gestalt lineage lured her to the Swiss Alps. There, in the Saas Fee laboratory of European Graduate School, brainchild of Dr. Wolfgang Schirmacher, she uncovered a collaborative philosophy of an authentic gender equality reflecting the new physics of entanglement. On September 9, 2014, a Badiousian Event was declared in the locality as a Deleuzian Eternal Recurrence of Difference. In this book, she discloses the ETERNAL RETURN with Difference that changes western civilization forever.
Follow Hermeneutics of New Modernism on WordPress.com