Toby Ashraf, the wunderkind Founder and Director of the Berlin Art Film Festival, who recently introduced a Mitte screening of ART GIRLS, the Berlin avant-garde multimedia feature film that crystallises the ever-present origin of a global movement centered in Berlin.

Still refreshingly raw as it appeals to audience participation for self-definition, the experimental (“Post Migration”) forms of categorization pioneered by the BAFF serve as a catalyst for a (R)evolution that is actively being shaped in its second year.

Ashraf’s brainchild is newly exploding the boundaries between art gallery and cinema, establishing a dialectic of integration along the way.

Ashraf lured the German actress Anne Ratte-Polle (above) to lend her star wattage to the 5 December “Nightsongs” kick-off charging through the border guards stipulating that art films be shown exclusively in galleries (for profit).

The BAFF screens films about Berlin. And what a subject! The communal space was chock full of electric shocks, which merely began with the focus on pioneering German female artists such as Helke Sander, Ulrike Ottinger and Isa Genzken.

During its 10-13 December run, the festival succeeded in characterizing the city that has become the world center of a new art movement encapsulating an icon personified in the flesh by the late American scene maker/artist Brian Tennessee Claflin, whose resurrection of the age of gender liberation in his club Pork surfed the collapse of the quantum wave in Berlin.

Tellingly, the brilliantly articulated multisensory ontology by the late American artist has branded the upstart BAFF as a pioneer upturning the cultural stasis represented by gallery walls shielding elite-bound art from communal ritual engagement found in the public theatre.

Signifier of a new movement on the funky borders in a name: Moviemento Kino had two small theatres and a circular cafe providing many avenues…

…of homage to the post-gender figure of Brian Tennessee Claflin… 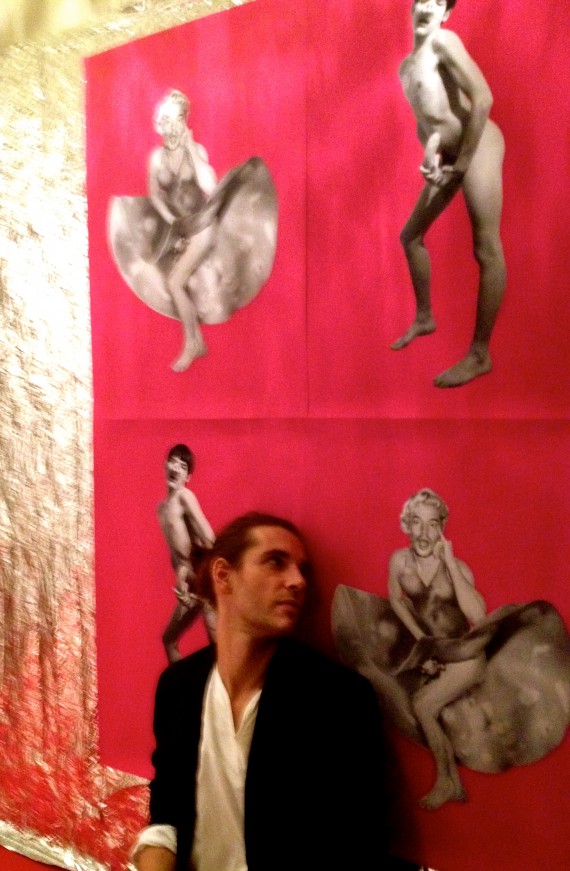 The quest for holism as the 21st century ontology in Claflin’s “Moths Around a Flame” establishes the symbol of light in the darkness of the after-postmodern tension between the opposites. (film still copyright of the Brian Tennessee Claflin Foundation).

…whose 3 minute multimedia ontology premiering at the BAFF blends image and words into a transcendent symbol of light.

The mythology of transcendence in a flame: scaling high and low society to no society through Claflin’s auto-epic “falling in love again” with Berlin’s gender-bending idol, Marlene Dietrich (film still copyright of the Brian Tennessee Claflin Foundation).

Travis Jeppesen and Michael Rade (l-r) of the Brian Tennessee Claflin Foundation shepherd the passage of their friend’s multimedia production into the film festival premiere; they explained that “Moth’s Around a Flame” was made to accompany a performance, and this is the first time it is being shown as a stand-alone work. (photo by Daniel Lathwesen for BAFF).

We suddenly realize how rare it is to experience how the piece of a holistic work of art reflects the integrity of its entirety. This BAFF epiphany–that artists surfing the wave into a new paradigm discard the holistic Art-I-Fact as the homo generator phenomenology of their (a)wake(ning)–points to an essential requirement for contemporary art: to flaunt the disciplinary boundaries regulated by the academy. Indeed, even MoMAis acknowledging a newfound readiness to break down the hierarchies of institutional art classification.

The encounter with the unexpected is what we have come to expect from art to move us through the crisis of uncertainty into the Third Space–out of the quantitative linear time and into the qualitative kairos magical interaction between past, present and future.

This provocation is what Ashraf–in his multiple roles as master of ceremonies, interpreter, moderator, organizer, juggler of formats and who knows what else–is bringing to the picture both big and small. He has grouped films of completely different formats and lengths together under topics like “Feminist Frontiers”– which singlehandedly revived Heike Sander’s 4 minute 1967 Subjectivity as a classic quest to break down the boundary between subject/object that Germans understand better than anyone, due to their highly structured rules of grammar.

The sequential Sunday sessions, “On Architecture” and “Germany Revised,” ordered the archeology of Berlin’s transition into a global (blessedly non-mercantile) art center through the literal gap of the no-man’s land surrounding the Berlin Wall, the Third space, or dead zone between East and West.

Ashraf placed his heart right into the center of his creation by introducing the film catalyzing his move to Berlin: Thomas Arsian’s 1991 student film “On the Margins” (1991) depicting the dead zone in its stark barren landscape as the symbol of Berlin’s uncertain future (LPS photo).

Subsequently, the director’s uncanny organizational skills elevated Hito Steyeri’s The Empty Center into a classic of cultural deconstruction. The 1998 documentary excavated the archeology surrounding the battle between immigrant labor and the German unions during the corporate reconstruction of Potsdammer Platz. The outcome of this courageous discursive plunge through the Derridian gap of Berlin’s empty center was an alarming exposé of a repeating German pattern of third world labor exploitation.

The twin pillar to this pioneering BAFF signaling around the centre was “Post Migration: Filming Immigrants and Refugees.” This Saturday afternoon section gave voice and vision to the outsider struggling for dignity and space in a city that is newly redefining itself through the hard work of reconciliation/integration.

If the festival itself was a paradigm leap into qualitative time, where a 3 minute projection carries the ontological heft of a new gender-free epoch–other films made explicit by design that to be authentically cutting edge means being “in the moment.” The most innovative example was Safe Space, when the dialogue leapt, like the renegade electron, right off the onscreen during the roll of credits to ignite the participation of the audience…

Zora Rux with her actors discussing Safe Space/Geschuetzter Raum, a fictional film that brilliantly captures, in an economical 15 minutes, the Third as the safe space to create new thought structures via a cultural clash instigated by a rape in a Berlin immigration camp.

… “We are the new generation,” proclaimed Rux, a 27-year old student from the Deutsche Film-und Fernsehakademie Berlin (dffb) whose breakout short film has been presented in nearly a hundred festivals.The discussion spilled over into Sunday panel: “Imagining: Refugees and Migrants on film.”

Denize Sertkol, German naturalized daughter of Turkish immigrants, talks about her “outsider” motivation for “KIss Me, Germany,” one of her two art installation videos in “Germany, Revised.” The afternoon theater screening opened up a dialogue about scale in presentation between the gallery and cinema (LPS photo).

In the intimate cafe setting, a new consciousness broke through by means of the metaphysics–the Butterfly Effect and the Uncertainty Principle— that migrant filmmaking brings to the big picture.

“Syrians have to live in Uncertainty,” says Syrian refugee filmmaker Khaled Mzher (right) with the star, Ahmad Faraj, of his deeply moving and timely “WADA,” crystallizing the “Butterfly Effect” of their nation’s crisis from an interior focus. Khaled’s dffb student film was already selected as a standout in the San Sebastian Film Festival and is headed to Cannes in 2016. (LPS photo)

New paradigms require new languages. It was all too clear that the foundation for this (R)evolution has been laid by the Berlin Art Film Festival N2.

Lisa Paul Streitfeld is a cultural critic and theorist based in Berlin, whose two decade dissemination of her art theory of the hieros gamos from the grassroots to the avant-garde entailed her forging a pathway between cinema and gallery. Her review of Brian Tennessee Claflin’s art appeared here: The Five Senses