As the Aquarian daughter of the Human Potential Movement, Dr. Lisa Paul Streitfeld has been on the quest of a new modernist dialectic sourced in authentic gender balance since 1970. That year, her father became the first pop psychologist when he introduced the encounter group on national television.

Dr. Streitfeld’s pioneering of occult apparatus (astrology, numerology and alchemy) in hermeneutics in her EGS Master’s degree (2014) and doctorate (2014) culminates with her investigation of “Paul is Dead at Fifty” for The Unreal, JOds MIT journal in September, 2019.

Early literary experiments with alchemy led to her launch of a 21st century dialectic “Eros as a Unifying force of a New Modernism” in her role as Southern Connecticut critic for Tribune Newspapers (1997-2005), subsequently developed as critic/curator in the New York avant-garde (2005-2011) and a global cross-disciplinary (R)EVOLUTION critical series for Huffington Post Arts (2010-2017).

An outgrowth of a six-year (R)EVOLUTION Series (2010-2016) for Huffington Post Arts which disseminated a holistic art theory around the globe through art reviews created in cyberspace, this ongoing blog project is a critical “real time” exercise in the articulation of the vocabulary of a new art movement. Launched with the publication of her thesis (Hermeneutics of New Modernism (Atropos Press 2014) simultaneous with the allegiance to an EVENT catalyzed in Saas Fee by Alain Badiou himself, as the quantum leap into the Third declared in Huffington Post Arts as the culmination of the EGS Media Lab founded and directed by Wolfgang Schirmacher (1998-2014). 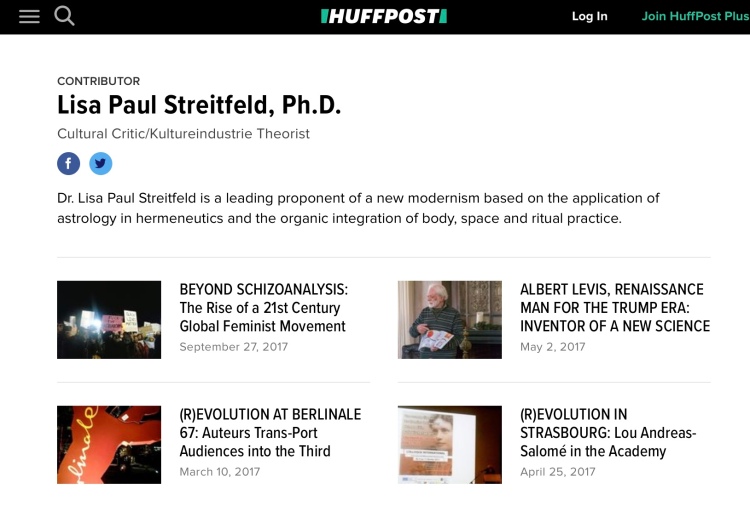 In the static pages, the author discloses the vocabulary of new science of entanglement at work in contemporary visual expression. The postings are an extension of the book detailing the ontology of a new continental “conversion” philosophy. What is unique about this philosophy is the cross-disciplinary collaboration of the greatest western minds: Wolfgang Schirmacher, Alain Badiou, Boris Groys, Antonio Negri, Michael Hardt, Graham Harman, Giorgio Agamben, Laurence Rickels, Avital Ronell and Slavoj Zizek.

The EGS Media Lab (1998 – 2014) incubated Dr. Wolfgang Schirmacher’s pioneering field of Media Philosophy; that the director lured Jacques Derrida, the founder of the French deconstructionist to the mountain to lecture to a handful of early students is Saas-Fee legend, as is the death Theodor Adorno, founder of the Frankfurt School, in Visp, the disembarkation point for the contemporary philosopher’s alpine trek into a new constellation.